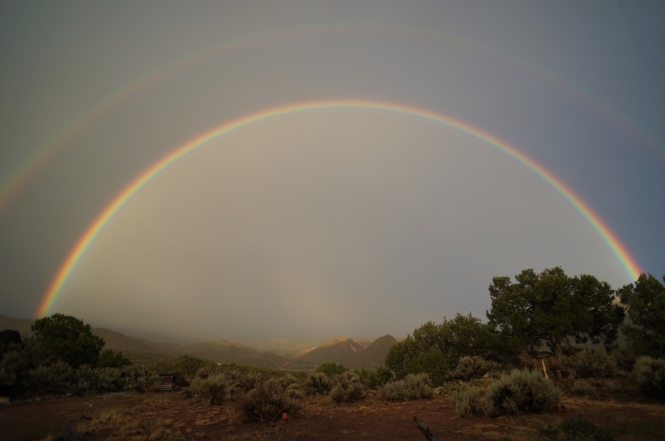 The Lord saw how great the wickedness of the human race had become on the earth, and that every inclination of the thoughts of the human heart was only evil all the time. The Lord regretted that he had made human beings on the earth, and his heart was deeply troubled. So the Lord said, “I will wipe from the face of the earth the human race I have created—and with them the animals, the birds and the creatures that move along the ground—for I regret that I have made them.” But Noah found favor in the eyes of the Lord.

This is the account of Noah and his family.

A month a go, I asked you all to tell me your favorite Bible stories and many of you mentioned Noah’s Ark is a favorite.

Let’s listen to more of the story …

Now the earth was corrupt in God’s sight and was full of violence. God saw how corrupt the earth had become, for all the people on earth had corrupted their ways. So God said to Noah, “I am going to put an end to all people, for the earth is filled with violence because of them. I am surely going to destroy both them and the earth. So make yourself an ark of cypress wood; make rooms in it and coat it with pitch inside and out. This is how you are to build it: The ark is to be three hundred cubits long, fifty cubits wide and thirty cubits high. Make a roof for it, leaving below the roof an opening one cubit high all around. Put a door in the side of the ark and make lower, middle and upper decks. I am going to bring floodwaters on the earth to destroy all life under the heavens, every creature that has the breath of life in it. Everything on earth will perish. But I will establish my covenant with you, and you will enter the ark—you and your sons and your wife and your sons’ wives with you. You are to bring into the ark two of all living creatures, male and female, to keep them alive with you. Two of every kind of bird, of every kind of animal and of every kind of creature that moves along the ground will come to you to be kept alive. You are to take every kind of food that is to be eaten and store it away as food for you and for them.”

Noah did everything just as God commanded him.

It would be really arrogant, and probably dangerous, to say I can explain every detail, but there are a few things that can help us make better sense of the story … and maybe even look at it from a different angle.

The first piece is to think about who the main characters might be – I say this, because I think, in many of our interpretations, we might not be paying enough attention to the right characters.

Sometimes we emphasize the animals …

Sometimes we emphasize the ark …

Sometimes we focus on Noah – He is important to this story, he is an example of faithfulness, but Noah really doesn’t say much … he doesn’t have any dialogue in the flood part of the story, in a different story about the time Noah invented wine and went a little overboard, he finally says something.

The flood story connects with the Genesis 1 creation story:

In the beginning God created the heavens and the earth. Now the earth was formless and empty, darkness was over the surface of the deep, and the Spirit of God was hovering over the waters.

God speaks into the chaos and creates order.

God creates order and relationships, and maybe most importantly, God gives humankind responsibility and agency (the ability to make decisions and do things that matter) to help God’s creation thrive.

Our flood story has similarities with those stories, but also striking differences. In other flood stories, the reasons for the flood are different – in one there are getting to be so many people on earth, the gods worry they won’t get enough food  (apparently these deities depended on the food they received from human offerings) so the flood is an attempt to preserve their personal food supply (Robert Alter, “The Five Books of Moses,” pp. 39 & 48). In another flood story, humans are too loud and interrupt the god’s sleep, so the god’s flood the earth to quiet it down so they can get a decent night’s rest (Everett Fox, “The Five Books of Moses,” p. 34).

These are selfish and troubling reasons for a flood.

In the Bible’s flood story, the Israelites use a familiar medium to make a unique claim about God. God doesn’t cause the flood out of selfish motives – God acts out of heartbreak and grief … I don’t think these are claims ancient people would commonly make about their deities.

God is convinced creation is good, reading the stories that come after creation, we might think otherwise. We see relationships breakdown, responsibilities disregarded, and agency misused. It gets so bad that when we get to Genesis 6, we hear God looks at humankind and is heartbroken to see so much wickedness. This is really important – the action in this story takes place, not from selfishness or ferocious anger, but from regret, from heartbreak, deep pain.

The third helpful piece is the Hebrew word Genesis uses for “corrupt” (the description of humanity) and “destroy” (the description of God’s actions) is the same word – maybe in a sense God is allowing humankind to experience the full consequences of their actions in the undoing of creation.

The story goes to great and painful lengths to make sure we understand everything and everyone not on the ark dies. But one thing, wickedness, the cause of all this doesn’t drown … it floats on in the ark even with the righteous and faithful remnant.

That is the part of the story that troubles me the most … even, after all this, humankind’s hearts don’t seem any different.

The waters flooded the earth for a hundred and fifty days … By the twenty-seventh day of the second month the earth was completely dry.

Then God said to Noah, “Come out of the ark, you and your wife and your sons and their wives. Bring out every kind of living creature that is with you—the birds, the animals, and all the creatures that move along the ground—so they can multiply on the earth and be fruitful and increase in number on it.”

So Noah came out, together with his sons and his wife and his sons’ wives. All the animals and all the creatures that move along the ground and all the birds—everything that moves on land—came out of the ark, one kind after another.

Then Noah built an altar to the Lord and, taking some of all the clean animals and clean birds, he sacrificed burnt offerings on it. The Lord smelled the pleasing aroma and said in his heart: “Never again will I curse the ground because of humans, even though every inclination of the human heart is evil from childhood. And never again will I destroy all living creatures, as I have done.

“And still every inclination of the human heart is evil.” All that, and humankind’s hearts are still the same as they were when the whole story started. Ouch!

There is one thing that ends up different in the story.

Then God said to Noah and to his sons with him: “I now establish my covenant with you and with your descendants after you and with every living creature that was with you—the birds, the livestock and all the wild animals, all those that came out of the ark with you—every living creature on earth. I establish my covenant with you: Never again will all life be destroyed by the waters of a flood; never again will there be a flood to destroy the earth.”

Knowing full well, with a broken heart and lots of reasons to give up, God commits to an ongoing relationship with humanity.

Could this be a picture of grace that took a strange path to develop?

Sometimes people have the understanding that the God we meet in this story about the flood is angry and the God we see Jesus reveal is the loving, graceful God.

Jesus confirms and embodies things we already know about God from the Old Testament. God offers grace. God pursues relationship when we haven’t done anything to deserve it. Injustice, violence, wickedness – all that stuff grieves God, it breaks God’s heart. What if the story of Noah’s ark tells us the story of a heartbroken God who grieves to see his beloved creation set on rebellion and causing pain?

That could go a long way in shaping how we understand God.

Even though it is a messy story, it makes a unique claim about God – God grieves the pain and hurt we see in the world and even though it breaks God’s heart, God doesn’t turn away from us, God promises to stick with us.