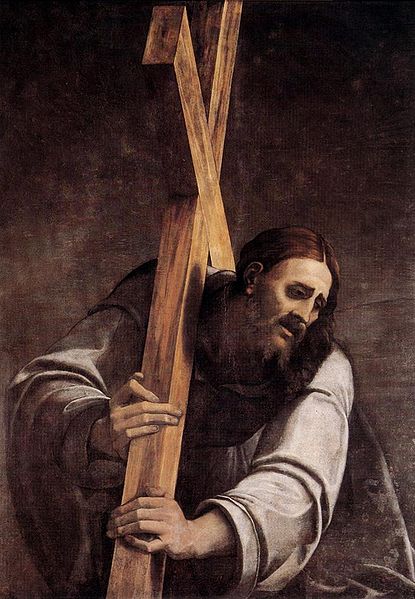 8.27 Jesus and his disciples went on to the villages around Caesarea Philippi. On the way he asked them, “Who do people say I am?”

28 They replied, “Some say John the Baptist; others say Elijah; and still others, one of the prophets.”

Peter answered, “You are the Messiah.”

30 Jesus warned them not to tell anyone about him.

31 He then began to teach them that the Son of Man must suffer many things and be rejected by the elders, the chief priests and the teachers of the law, and that he must be killed and after three days rise again. 32 He spoke plainly about this, and Peter took him aside and began to rebuke him.

33 But when Jesus turned and looked at his disciples, he rebuked Peter. “Get behind me, Satan!” he said. “You do not have in mind the concerns of God, but merely human concerns.”

34 Then he called the crowd to him along with his disciples and said: “Whoever wants to be my disciple must deny themselves and take up their cross and follow me. 35 For whoever wants to save their life will lose it, but whoever loses their life for me and for the gospel will save it. 36 What good is it for someone to gain the whole world, yet forfeit their soul? 37 Or what can anyone give in exchange for their soul? 38 If anyone is ashamed of me and my words in this adulterous and sinful generation, the Son of Man will be ashamed of them when he comes in his Father’s glory with the holy angels.”

9.1 And he said to them, “Truly I tell you, some who are standing here will not taste death before they see that the kingdom of God has come with power.”

The location, Caesarea Philippi, tells us something important about this story.

At the heart of the gospel there is a conflict between two worlds.

God’s world of life-giving grace and the powers that suck life from people in their attempts to protect their own power and control people.

The name of the town remembers two ancient politicians. The first one is probably pretty obvious – Caesar-ea. In 20 BC, Caesar Augustus gave this geographic area, including a shrine devoted to the ancient Greek god, Pan, to Herod the Great. Herod was so grateful for this gift, he built a white marble shrine and dedicated it to Caesar Augustus. After Herod died, his son Herod Philip inherited his father’s power and established a town in the area and named it Caesarea, after Caesar. There was another community named Caesarea, so people to called this one Caesarea Philippi. This town was Philip’s capital city, a center of politics and worship.

So, here in Caesarea Philippi, Jesus reveals more of his identity and mission — he is the Messiah, a loaded term that would have meant different things to different people back then. William Placher, writes that, “At [the very ] least, it meant this: “You are God’s anointed, who will somehow make things better than they are now, better than they have been for a long time” (William Placher, Mark: BTC, Kindle Loc. 2462-2463).

For people reading Mark’s gospel after Jewish/Roman war there may have even been some pain and bad memories connected with Caesarea Philippi, since in 70 CE the Romans hosted games there to celebrate the capture of Jerusalem (NIDB).

It would have been hard for Jesus’ disciples and the people who first read Mark’s gospel to miss the political shadows hanging over this conversation.

Since we have been working our way through this story from its start in the first chapter of Mark, we have had access to details the people living in this story didn’t. We have known Mark’s claim that Jesus is the Messiah from the very beginning, from the first verse of the very first chapter —  “The beginning of the good news about Jesus the Messiah, the Son of God.” We know this, but it has taken a while for everyone else Mark tells us about, to figure it out. Actually, even after all they have seen, even after everything Jesus has told them, the disciples still seem to be having a hard time with this. (Maybe that miracle just before this, where Jesus has to touch a man twice to restore his sight, because the man couldn’t see clearly the first time Jesus touched him, is a hopeful picture for the disciples. Even though they are having a hard time figuring out who Jesus is, Jesus will stick with them, he will encounter them again and again to help them to see who he is more clearly.

Other places in Mark’s Gospel, when there is an important theological term, or a significant piece of important background information, Mark has filled it in for us. Like last week, in chapter 7 when Mark offered a few background notes on the importance of ritual washing and why the Pharisees cared so much about it. Here Mark doesn’t offer us those notes in a parenthesis.

I have been wondering why Mark doesn’t give us brief explanation of what “Messiah” means.

I realized. Mark doesn’t give us a brief definition of Messiah.

Mark gives us an extended definition of Messiah. I think Mark actually uses the rest of this chapter, and even the rest of his gospel to let Jesus define in his words and actions, to show us what it means that he is the Messiah.

Jesus is the one, the Messiah, who must suffer many things, be rejected by the elders, the chief priests and the teachers of the law, he must be killed and after three days rise again.

This must have sounded so strange and disorienting to the disciples. Here Jesus is saying that he is going to suffer at the hands of enemies. What kind of Messiah is he supposed to be? Does he even understand what Messiah means? People generally believed that the Messiah was supposed to be the one who would cause enemies to suffer. The Messiah wasn’t supposed to suffer.

Maybe as Jesus continued teaching about being the Messiah, it sounded more and more awful.

Peter couldn’t stand it. He rebuked Jesus. (This is the same language Mark says Jesus used when he rebuked demons.) Using intense language, Jesus insists that this is his way. He tells Peter, “Get behind me Satan. You’re not thinking in God’s ways. You’re thinking in human ways.” Jesus reminds Peter that disciples don’t lead Jesus, they walk behind Jesus. Disciples’ follow Jesus’ way.

When Jesus called the crowd and the disciples together, to talk about discipleship, he says something that had to have been even more shocking than anything he said about the Messiah suffering and dying.

Jesus said that whoever want’s to follow him, must deny themselves, pick up their cross, and follow Jesus.

The crowd … the disciples, they couldn’t have known what to make of this talk about crosses.

What could a cross have to do with a Messiah?

What could a cross have to do with anyone who was trying to follow that Messiah?

Crosses can mean a lot of good things to us.

There are crosses all around us.

At night that big cross that lights up on 285, just past Denver, reminds us we are on the way home.

Simple gold crosses hanging from necklaces. Complicated cross designs embroidered onto jeans.  We give each other crafty crosses for gifts. For us, crosses are common symbols of Christ’s love, hope, and goodness.

Crosses were designed to be terrifying, threatening, humiliating, and shameful.

Crosses were designed to make examples out of people.

Crosses were designed to be terrible.

“The ‘cross’ had only one connotation in the Roman empire: upon it dissidents were executed … the turn of the phrase [take up your cross] could have no other meaning except as an invitation to share the consequences facing those who dared challenge the ultimate [dominance] of Rome. Nothing could have sounded less fashionable to the ears of Mark’s readers than when Jesus compared discipleship to the public spectacle of the cross. With this horrific image, Jesus demands that those who would follow him move beyond the safe confines of private religious experience. To ‘take up your cross’ is a call not to ascetic spiritual disciplines but to public ministry that confronts whatever powers prevent the saving work of God” (Preaching Mark in Two Voices, 149).

Bearing the cross isn’t about inconveniences, enduring pointless and mean-spirited abuse, it’s not about feeling like a doormat. Bearing the cross has to do with engaging our world and aligning ourselves with God, standing up to any power that seeks to make itself more important than God and seeks to stand in the way of God’s work to bring healing, wholeness, and renewal to all people.

“Whoever wants to be my disciple must deny themselves and take up their cross and follow me. 35 For whoever wants to save their life will lose it, but whoever loses their life for me and for the gospel will save it.

Jesus invites his disciples, he invites you and me to follow him, and as we follow him he calls us to stick out our necks, to lay down our lives, to join with him in his work to bring salvation, healing, renewal and wholeness to the world God loves so much.